When you move into a house where a cult murder occurred to write about the murder, it can’t end well. A review of Within These Walls by Ania Ahlborn. (4/5)

Within These Walls by Ania Ahlborn was released in April 2015, and I read it December 8, 2017. I basically ignored all other responsibilities I had on Friday to finish this book. Particularly with horror/thriller novels I am not good at reading them in pieces as the tension doesn’t dissipate for me when I close the book to go do other things. Anyway, I binged this and it was great.

A summary from Amazon:

How far would you go for success? What would you be capable of if the promise of forever was real?

With his marriage on the rocks and his life in shambles, washed-up true-crime writer Lucas Graham is desperate for a comeback, one more shot at the bestselling success he once enjoyed. His chance comes when he’s promised exclusive access to death row inmate Jeffrey Halcomb, the notorious cult leader and mass murderer who’s ready to break his silence after thirty years, and who contacted Lucas personally from his maximum-security cell. With nothing left to lose, Lucas leaves New York to live and work from the scene of the crime: a split-level farmhouse on a gray-sanded beach in Washington State whose foundation is steeped in the blood of Halcomb’s diviners—runaways who were drawn to his message of family, unity, and unconditional love. There, Lucas sets out to capture the real story of the departed faithful. Except that he’s not alone. For Jeffrey Halcomb promised his devout eternal life…and within these walls, they’re far from dead.

Warning, this is going to be slightly spoilery. 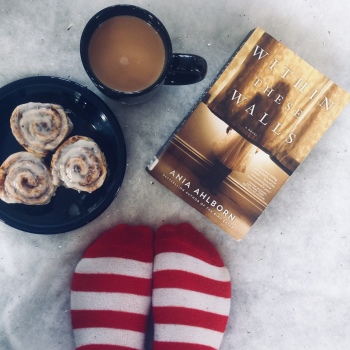 One of the strongest parts of the novel for me was Vee – she’s normal. Normal in the sense that she’s struggling, angsty, a bit morbid, and trying find where she fits in. I was especially disturbed at the role she played in the novel because she is so much younger than the people Halcomb recruited and influenced at only 12. It made sense because it meant it would be even easier to manipulate a child on the cusp of adolescence who had no life experience to give her any doubts at all. At first, I was actually disappointed in her. About 3/4 through the book I was just thinking “ugh, why? This does not seem in character.” But then when I thought about the way living in that house and the influences within it were impacting both Vee and Lucas, it made sense that Vee would not take a minute to second guess what was happening to her. Sometimes I forgot Vee was only 12, but I don’t think others in the novel did which also led to the authenticity of her voice and responses – I too, would have loved to be left alone all the time when I was 12 and was not allowed to do so.

Lucas made me feel all sorts of ways. I understood what it felt like to disappear inside writing and time passes and you don’t notice it or forget to eat or break promises. But he was so aware of it and kept doing it anyway – he knew that things weren’t right in that house, that something was wrong, and opened himself up to being taken over. While It’s clear Halcomb still had influence and was dangerous, Lucas is at fault, in the long run. He lies, he hedges, he procrastinates, and he acts selfishly. On a spectrum of good father to bad father, he lands on the bad father end of the spectrum.

The atmosphere is SO FANTASTIC. I feel a little bit shamed for my immediate love of the old school retro house with conversation pit living room that everyone made fun of, but I also felt like I could picture the house really well. I could picture why the shadows were creepy. The atmosphere was just right in terms of the house being isolated, the house being a special location that caused the characters would question if something was real or not, and the way each character’s own specific fears were well articulated. Ahlborn describes their fears in a multi-sensation way that it’s easier for the fear to come off the page, and reminds the reader that the characters are always being watched. If they are in that house, they are never alone. It’s very creepy.

Any fan of horror, who has even a passing interest in cults, will enjoy this book. I appreciated the point that people aren’t aware they are joining a cult when they do. That’s kind of the point – you don’t know what’s happening until you’re too stuck to get out.

I would also love to read about young Jeffrey Halcomb and his time in Veldt, KS. I have so many questions, and the origins of the cult leader was one of the parts of the book that intrigued me the most. I’m often more interested in the origins of the criminal than in the crimes themselves.

Overall, I give Within These Walls 4/5 for being eerie and dark and making me say “Oh no!” to the ending. And that there was an extra twist at the that I wasn’t expecting. Abandon hope, anyone who reads this, and prepare to walk into darkness. This was my first Ania Ahlborn that I got from the library, and I will be checking out the others on the shelves.

A damaged clock can fracture time, it’s Danny Hart’s job to prevent that from happening. A review of Timekeeper by Tara Sim (4/5)

A summary, from Amazon:

“In an alternate Victorian world controlled by clock towers, a damaged clock can fracture time—and a destroyed one can stop it completely.

It’s a truth that seventeen-year-old clock mechanic Danny Hart knows all too well; his father has been trapped in a Stopped town east of London for three years. Though Danny is a prodigy who can repair not only clockwork, but the very fabric of time, his fixation with staging a rescue is quickly becoming a concern to his superiors.

And so they assign him to Enfield, a town where the tower seems to be forever plagued with problems. Danny’s new apprentice both annoys and intrigues him, and though the boy is eager to work, he maintains a secretive distance. Danny soon discovers why: he is the tower’s clock spirit, a mythical being that oversees Enfield’s time. Though the boys are drawn together by their loneliness, Danny knows falling in love with a clock spirit is forbidden, and means risking everything he’s fought to achieve.

But when a series of bombings at nearby towers threaten to Stop more cities, Danny must race to prevent Enfield from becoming the next target or he’ll not only lose his father, but the boy he loves, forever.” 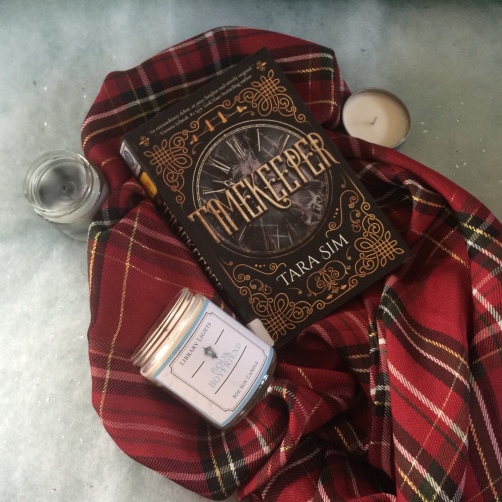 Reading is powerful because it allows us to experience lives that are different than our own, or experience a resonance because we realize that we are not alone. That’s kind of how I felt about Timekeeper, but it was unexpected.

All through the book the narration and other characters talk about Danny as “weird” because he’s quiet or reserved; he doesn’t see the need to make small talk, or even necessarily to form bonds, with the people he works with. Danny is mostly okay inside his own head, and focuses on the things he cares about rather than the things people tell him to care about. I think it’s what gives him a cool head in the crisis that comes from falling for a clock spirit. I identified with this – keeping work and non-work life separated. I’ve been…criticized [this is the nice word] because I don’t tend to become besties with co-workers and like to run circles in my brain on my work before talking to other people about it. Danny is just outwardly chill with a chaos brain and I related to that HARD.

To start, I thought the concept of Time in the book would bother me, but the blend of religion and science helped. I also appreciated that there wasn’t an exhaustive amount of exposition explaining the way the world functioned. If there was too much detail I think it would make more holes and pieces to pick at than telling the bare minimum. Sim makes some excellent authorial choices in how she has the mythology develop across the book and what she spends page time on. I think it’s way more important to understand how the fibers of time work for Danny than it is to understand how the fibers of time work in general. I have a vague notion of the magic that runs the world, but at it’s heart I need to know how the world impacts Danny. That’s who I’m invested in.

I’m hoping in the next book, Chainbreaker, we get more of Cass and Daphne (especially Daphne – I have SO MANY QUESTIONS.) They are both intriguing and fiery and could probably beat Danny up really easily. I like that the more masculine/physically fierce characters in the story are the women. It was fun to see how Victorian London was bent to Sim’s vision, and how that opened up fun explorations of sexuality and gender roles.

I gave this book 4 stars because I think there’s more here, and I think I’ll get it in the next one. If you like alternative worlds, sad boys, angry boys, a LOT of justifiable drama, big scary moral dilemmas, and crazy tension leading to resolution – this is definitely the book for you.

Chainbreaker comes out January 2, 2018 – consider reading Timekeeper and picking it up!