Sarcastic Elliot crosses the wall to the Borderlands, but it’s not like the stories he’s heard before. IN OTHER LANDS by Sarah Rees Brennan (5/5)

You don’t even need to read this review, you can stop right now and get your hands on IN OTHER LANDS by Sarah Rees Brennan as soon as possible.

IN OTHER LANDS was published on August 15, 2017 and I read it August 23-24, 2017 after reading a Twitter thread posted by Seanan McGuire that fully convinced me I needed to read this book.

Tell me you wouldn’t be totally curious – and the rest of the thread further justifies my feelings. I bought the book based on the thread and tried to put off reading it until I was done with my library books, but I was too intrigued and I totally disappeared into the book. I stayed up until almost midnight on the 23rd to finish it, and actually got up when my alarm went off on the 24th so I could read for a bit before work. I would have picked reading this book over eating food. Luckily, I could do both at the same time. 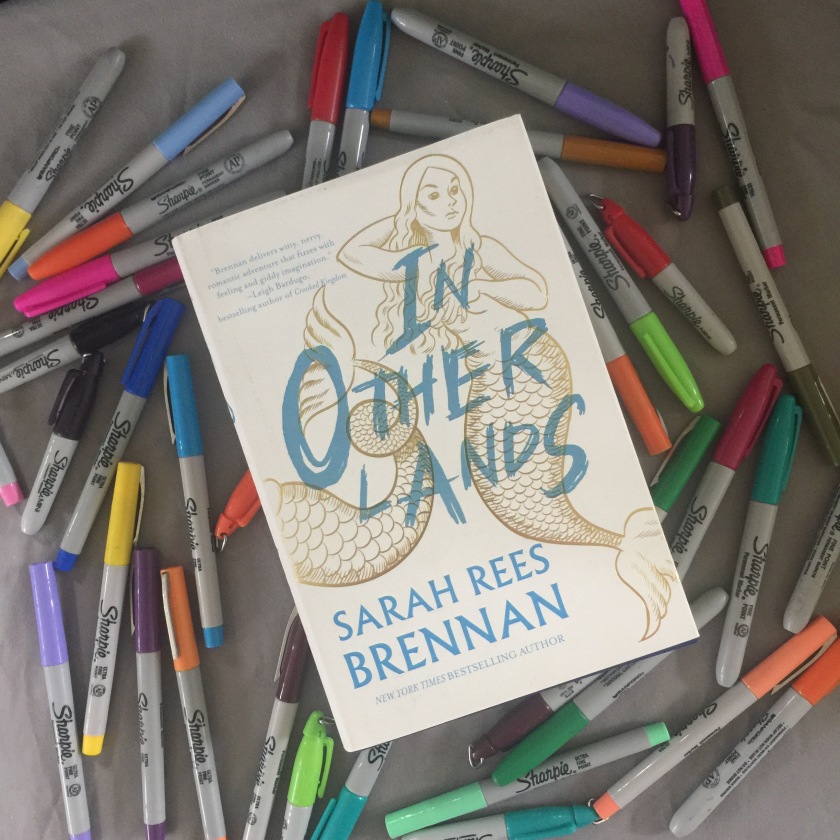 From Amazon, another (modified) summary:

Elliot is thirteen years old. He’s smart and just a tiny bit obnoxious. Sometimes more than a tiny bit. When his class goes on a field trip and he can see a wall that no one else can see, he is given the chance to go to school in the Borderlands.
It turns out that on the other side of the wall, classes involve a lot more weaponry and fitness training and fewer mermaids than he expected. On the other hand, there’s Serene-Heart-in-the-Chaos-of-Battle, an elven warrior who is more beautiful than anyone Elliot has ever seen, and then there’s her human friend Luke: sunny, blond, and annoyingly likable. There are lots of interesting books. There’s even the chance Elliot might be able to change the world.

-I laughed. A lot. Loudly, awkwardly. I disconcerted people. Elliot is so fantastically sarcastic and snarky, so you definitely laugh with him. However, being inside Elliot’s head you know what he’s not seeing or realizing as he goes through his life that sometimes, you are definitely laughing AT him. IOL also handles the way some portal fantasy ignores technology and the advancement beyond it’s borders to hilarity and explosiveness (literally) – but the native Borderlanders trying to understand Elliot is hilarious. When you get to the scene when Luke tries to describe what computers are, it’s somehow the most incorrect and most accurate description of the internet, possibly ever.

-I pretty much could not stop myself from reacting out loud in general. There was gasping and “oh no!” and some annoyed snorting because in both patriarchal and matriarchal societies, people can be extremely stupid. Xenophobia and cultural difference are the big, obvious themes of this novel right from the beginning. It provides a gentle reminder in the safer context of a fantasy world that it is okay to challenge norms and prejudices, and that it is easier than you think to stand up to them. The kids in this book aren’t just brave because they fight in battle. They are brave because they refuse to let prejudice define their relationships.

-The world of the Borderlands is big enough to be dangerous, but not so big as to be confusing. And I like that there’s history to the creation of the Border Guard but not a million pages spent trying to explain the existence of the Borderlands. The point of this story is that there is not one Big Bad, one chosen kid who will fix the whole world to exist in peace forever; so ultimately, how the Borderlands were created is irrelevant. The story is about how then got them to NOW, and dealing with the bad things that are happening in the now. I also appreciate the message that peace is delicate, and it takes constant upkeep.

-I was genuinely surprised that someone as verbally brutal as Elliot was a pacifist, but I also think his reasons for being so are clear without him actually explaining how he came to that stance on things. We are given the pieces and can put them together.

-Nothing is perfect. This sometimes gritty world felt more real than some contemporaries I’ve read because even in the best circumstances there are failures, stupid things said, people who don’t care or don’t love, people who do worship violence and do not want peace. People lie and cheat and take things they have not earned. And it questions the most irritating of all occurrences in novels where kids are whisked away to magic school: WHY DOES NO ONE USE PENS?!!?!?! Because honestly, Harry Potter was too damn lazy to be that excited about quills, color-changing ink be damned, and Ron would have adopted that Muggle tool in a hot minute. I defy you that anyone as bookish as Hermione didn’t have a freaking pen and stationery collection. In this instance, Elliot is better than Hermione by a long shot. You heard me.

-This is definitely a book for the people who found themselves agreeing a little bit with Eustace Scrubb. Who found his “WTH?!” reaction perfectly rational. We want to believe we’d be a Lucy, but face it – more of us are Eustaces.

There are so many more things that I liked but I don’t want to give away any spoilers so I’ll just say…Sisters, the first Break Up, Being that Person that Is Oblivious to Others Crushing on Them So Often Its Embarrassing.

Anyway, IN OTHER LANDS is absolutely a 5/5 read for me. Get this book, fall in love with it, buy it for everyone you know.

Back to back 5/5 reads for me recently, as I started reading it right after finishing The Long Way To A Small, Angry Planet by Becky Chambers. These were excellent books to read back to back as both deal extensively with cultural differences and basically not being a disrespectful boob.