The stars really aligned for me to read this book on Saturday (April 15), as there was a Doctor Who reference about midway through, and it was also an excellent distraction as I waited for the 10th series premiere. I have not been excited about a companion in quite some time as I am about Bill – she’s going to be amazeballs.

Anyway. Alex, Approximately by Jenn Bennett was released April 4, 2017 – I purchased it on April 3,2017 because someone (and I can’t figure out who) retweeted it or responded to Jenn’s tweet, and I was like – You’ve Got Mail retelling? I AM IN FOR THIS. I love that movie so much, and I still cry all the tears.

Classic movie buff Bailey “Mink” Rydell has spent months crushing on a witty film geek she only knows online by “Alex.” Two coasts separate the teens until Bailey moves in with her dad, who lives in the same California surfing town as her online crush.

Faced with doubts (what if he’s a creep in real life—or worse?), Bailey doesn’t tell Alex she’s moved to his hometown. Or that she’s landed a job at the local tourist-trap museum. Or that she’s being heckled daily by the irritatingly hot museum security guard, Porter Roth—a.k.a. her new arch-nemesis. But life is whole lot messier than the movies, especially when Bailey discovers that tricky fine line between hate, love, and whatever-it-is she’s starting to feel for Porter.

And as the summer months go by, Bailey must choose whether to cling to a dreamy online fantasy in Alex or take a risk on an imperfect reality with Porter. The choice is both simpler and more complicated than she realizes, because Porter Roth is hiding a secret of his own: Porter is Alex…Approximately. 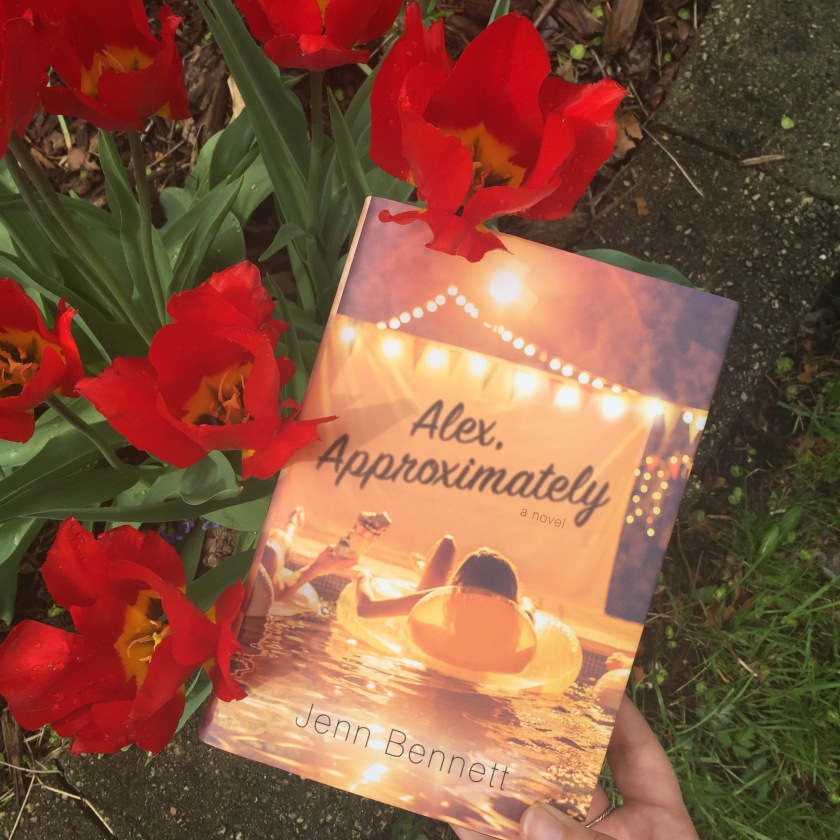 As always, summaries do so little justice to the books they represent, because good books cannot be summed up in a few paragraphs. This book, while hilarious and delightful, is not light or even fluffy. This isn’t about romance as much as it’s about figuring out how to still connect with people despite pain, trauma, and responsibilities. It’s about how complicated our family ties really are, and that your family makes you into an adult – for better or worse. This book was great.

One of the things I struggle with in contemporary YA is that the teens often jump to conclusions about the adults, or misinterpret events in such a way that even the reader is like – what is wrong with you? I love that this book doesn’t do that, even a little bit. There’s no ambiguity to the adults – if they aren’t direct, someone around the characters comes out and clears things up in some way. It doesn’t mean all the adults are good and good parents and like the teenagers, just that you don’t jump to conclusions.

Recently, I read an article about the Hate U Give and about how Angie Thomas brought family back to YA – I think this is another example of that. Family and familial relationships are integral to this story, and to Bailey’s journey. It also clearly demonstrates that some people just fail at being a parent, and sometimes it’s because they have to take care of themselves as an individual human when they have the space to do so.

This next thing I’m going to try and talk about without spoilers. Bad stuff has happened to both Bailey and Porter. What happened to Bailey is probably my greatest fear, as someone who often holds people accountable for their actions and is part of separating them from their education, that’s the shit I have nightmares about. And I’ll be honest, when the storyline was first hinted at I thought it was going to be too over the top, or too much for a teen contemporary romance. But it wasn’t. It was impactful and delivered well and at the exact right moments in the story. It’s also sadly realistic for our world and it’s much easier to deny that than accept that it’s not such a crazy thing to include in a novel. It’s not even an extreme example. So yeah, some dark stuff happens but we get to see a teenage girl successfully working through her response to trauma. We also get to see her help someone else deal with their own, and it’s such a REAL moment. Like a punch in the feels kind of moment, but you’re okay with the bruise.

Believe me, this book is not light, and I’m going to keep saying that and I mean it as a compliment. The highest of compliments. It has very cute moments and Porter sounds very sexy, but some romance feels that it’s a slight shift away from reality because love is the center of the world. That’s not the case in Alex, Approximately – there’s so much more going on for both of these characters. You see them struggle, adapt, change, and realize things about themselves. Bailey is a great character to follow because you can both empathize with her, and want her to stretch and be more, or be who she wishes she was.

The best way I can sum up this novel is REAL. The characters and their experiences are such an accurate and sharp slice of real life. There’s teenagers doing sexy things and talking about it and being smart and figuring out what they want, and how to explore becoming a sexual being. Without being pornographic or exploitative. There’s teenagers falling in love and making mistakes and being scared and truly, deeply loving the nerd thing they are into. It’s teenagers thinking about the future without the cliche version of the “pressure from parents” plot. It’s people losing things and changing dreams and trying to protect the people they love. It’s people recognizing that we all have darkness inside, but we have light, too.

I give Alex, Approximately a 5/5 because I was hooked the entire time and read the book in one sitting. After the Doctor Who premiere I was going to go to bed, but I didn’t. I stayed up and finished this book. I was expecting a fun, romantic teen version of a fairly light film, and got something that was fun and romantic, but deep in scope. Definitely read this.