When I was reading this book I kept thinking, “I need an adult!”

The Women in the Walls by Amy Lukavics was released September 27, 2016 and I read it December 5-7, 2016. Weirdly enough, I think I can consider this a holiday-appropriate reading choice as the conclusion of the story revolves around a Christmas party. Someone is even wearing a tinsel and ornament dress. 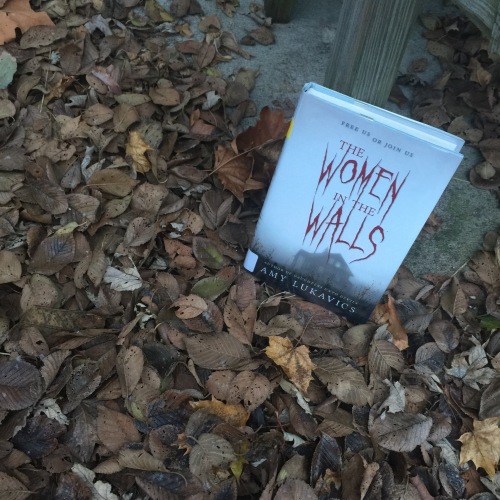 From Amazon:
Lucy Acosta’s mother died when she was three. Growing up in a Victorian mansion in the middle of the woods with her cold, distant father, she explored the dark hallways of the estate with her cousin, Margaret. They’re inseparable—a family.

When her aunt Penelope, the only mother she’s ever known, tragically disappears while walking in the woods surrounding their estate, Lucy finds herself devastated and alone. Margaret has been spending a lot of time in the attic. She claims she can hear her dead mother’s voice whispering from the walls. Emotionally shut out by her father, Lucy watches helplessly as her cousin’s sanity slowly unravels. But when she begins hearing voices herself, Lucy finds herself confronting an ancient and deadly legacy that has marked the women in her family for generations.

For those who might need it – trigger warnings for significant self-harm, suicide, mental illness, and general gore and violence.

Things that gave me feelings:

While I agree with Lucy’s eventual realization that she gets caught up in herself and can be a little judgmental, I also think she might be too hard on herself. This poor girl is so clearly abused into submission, and it’s done in partnership by her two parental figures. No one really cares about her – she is just a tool. The interactions between Margaret and Lucy are especially heartbreaking because they are cousins, friends, but the thumb under which they function has twisted even that one good thing in their lives. Margaret is hella sassy though and I enjoyed her. I wish she had been used more to call out the bullshit – Margaret was the Id to Lucy’s Ego, and it would have been fun to see more of that go wild.

“How to write a novel: create shitty situation for your protag. Make it worse. Worser. Now REALLY make it worse. Resolve that shit. #theEnd”

That is pretty much how things for for Lucy, except true to horror form the resolution may actually be worse than anything else that has happened to her. The end is a big, gaping tunnel of mouth screaming “No!” for eternity. There are so many layers to why the ending is so awful, in general and for Lucy in particular. It was just devastating. But it’s also the source of one of my dislikes with this novel – why? Why did Lucy give in to the ending? Why would she stay?

Everyone is the villain in this story. There’s this sense while reading that there is no safe place – no person, no room, not even in sleep. The tension just builds and builds until all the shit hits the fan and then it gets weirder and weirder. I was less scared of the Big Bad at the end than I expected, and part of it is because…well, some of the shit that happened was justified. The Big Bad might be the only one who was justified to do anything, which is interesting to consider – the primal, ancient dangers that still lurk around us and how their violence can be acceptable.

I still have a lot of questions about why things went the way they did, and I can’t quite say this was a five star read for me. Lucy was clearly intelligent and aware of how dire the situation was and yet…nothing. Maybe it’s commentary on the fact that humans often talk ourselves out of the facts that are smacking us in the face and it’s easy to play them down or talk ourselves out of it, or say if something else happens or waiting for arbitrary reasons, we are punished by life itself.

From a purely technical sense, I was confused by some of the structure and I don’t think it was intentional. Chapters would start with Lucy’s narration as if a lot of time had passed, or as if she’d been bothered by a certain event or feeling for a period of time, and then we would jump from narration to action and I would find zero time had passed between the end of one chapter and the start of the next, or only a handful of hours. The sense of time was not what it needed to be in some chapters, and it kind of broke the feeling of urgency that was built. Luckily, it was built up again in quick fashion, but it still jerked me out of the narrative because I was asking questions about structure rather than plot.

I definitely want to read Lukavics’s first novel, Daughters Unto Devils, and will absolutely pick up her work in the future. She is a fresh, frightening, wickedly macabre and morbid voice and it seems that the women she writes have something to say. Or something to destroy.  The Women in the Walls was 4/5.