Marin can see people’s pain, but looking inside a classmate’s head she sees a blackness inside that might be something…else. Be Not Afraid by Cecilia Galante (4/5)

This book is definitely scary, and I think very different from Galante’s other writing. In her author bio it’s indicated that this is her first YA/Horror novel, and I am curious if she will return to the genre. 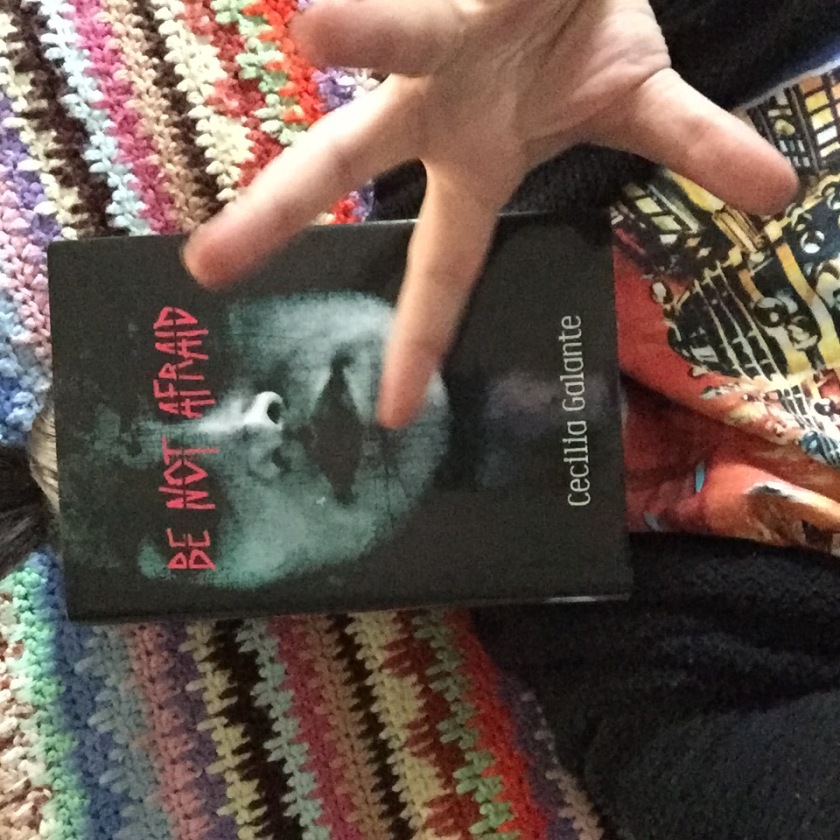 Be Not Afraid is the story of a teen girl named Marin who develops the ability to see people’s pain inside their bodies after a personal tragedy. In a new town and a new school she is tricked into completing a ritual with her classmate Cassie that leads to scarier consequences than either could have foreseen. Now everyone is in danger, Marin must face her past and her present, and along with Cassie’s brother Dominic she needs to find a way to use her ability to save lives.

I do want to give potential readers trigger warnings for eating disorders, self-harm, and suicide. This book, even with a happy-ish ending, is incredibly dark. It’s also very real – I don’t think the pain is put in this novel for sadistic purposes, but to reflect real life.

If you are not into possession stories, this is not the book for you. It also relies heavily on Catholic doctrine and theology in regard to possession and exorcism, but isn’t so specific that someone unfamiliar with the religion would be confused about what’s going on. It is both a classic possession story, and one with it’s own spin given the fact that Marin’s ability allows her to not only see the demon inside, but see the physical injury the demon has inflicted.There is also a lot of contemplation about belief, blessings, and purpose. It doesn’t feel overly preachy, but like the thought and growth process someone who has been raised in a mostly devout household might experience as they grow up.

Marin’s ability to see pain is unique, and I enjoy that it’s source is only theorized and never definitively explained. Marin’s family is struggling and grieving, and is such an accurate depiction of loss that it kind of hurts to read. When people are grieving, they often blame themselves even when it doesn’t make sense, and when we’re struggling we sometimes shirk responsibilities that we shouldn’t have. I could have read a book just about Marin and her family, minus the pain-seeing and possession, because it’s compelling, and very, very real for so many people.

I was honestly scared in parts because as a person who was raised a certain kind of Catholic (I now consider myself lapsed), possession was taught to you as a real thing, and something that especially afflicted children. Even without that, some of this is just scary because the possessed character is so unpredictable, and we have a protagonist who often gives into her fear and panic and runs away, damn the consequences.

The thing I didn’t like is kind of oddly specific. I didn’t like that Marin had a crush on Dominic before all of this started. While I enjoyed their relationship, I think it would have been more powerful to me had they found romantic feelings for each other during the kind of crazy journey of this novel (because it’s about so much more than the possession.) Before the present events, Dominic was there for a really humiliating moment in Marin’s life and I just don’t see a crush being developed or sustained from that. It was nice to see how much both characters changed and learned and felt for each other, but Marin’s struggle right from the beginning about saying no to him didn’t feel totally in-sync with the rest of her characterization.

Lucy was also under-utilized. It’s a little…stereotypical for the introvert/shut off main character, and it can get frustrating to read someone who is so open and caring being denied for almost no reason.

Overall, this was a creepy read that wasn’t like other possession novels I’ve read. It’s not so scary you’re going to be afraid after, but it was a book that I wanted to read in one sitting so I had a resolution right away to process. I’m rating Be Not Afraid a 4/5, with the note to self that I would read another Galante horror novel.