“How can a person be so good and so bad at the same time? How is that possible?”

I couldn’t wait for it to come in the mail so I checked it out of the library.

Between the Spark and the Burn by April Genevieve Tucholke was released in August 2015. I read it October 20-21, 2016. I am just burning through books right now, but it’s also the quiet part of the year for me when I have a lot of free time at home.

First reactions:
Have their ever been two more differently lovable brothers than River and and Neely?
And as much as I personally am drawn to River, I absolutely wanted Violet to push him off a cliff.
Everybody is both Violet. Everybody. 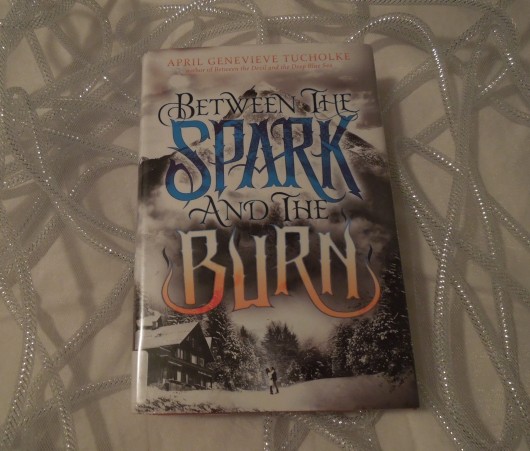 After River left at the end of Between the Devil and the Deep Blue Sea, Violet’s life settled a little – her parents, her brother Luke, and their ward Jack paint and exist and Neely comes in and out of the guesthouse after going on River-hunts. Finally, Christmas Day, Violet decides she’s going with Neely to find River. The group have started listening to a radio program – Stranger Than Fiction – and they follow the clues in the program to potential locations of River, his evil brother Brodie, and maybe even other gifted Redding siblings. They journey to Virginia and save another stray – Finch Grieve, the Forest Boy. Then they head to an island off the coast of North Carolina and finally find River, but not as they expected, and pull native-islander Canto into their motley crew. No one is safe, everyone is breaking, and they head to Colorado to confront themselves and their future.

There’s definitely room for more books in this series, but even without them this would be a satisfying conclusion. It’s not always about the resolution of the greater plot as it is about the resolution for the main character – the end of this feels like a shift for Violet, and that’s what this whole story has been about.

Violet is such a true character. People are not all black and white, and this book demonstrates that perfectly. There are so many layers and twists of both beauty and ugliness in them all. You don’t know what side of them you’ll get in a given situation. But Violet is the most true, for a girl her age and temperament. There isn’t an easy decision and everything feels like life and death and sometimes it is and sometimes it isn’t. Violet tries to balance the rational with the emotional, and to find a way to do the right thing. I really enjoy reading her, and I will likely visit this world over and over.

I had my suspicions about where Brodie was from the beginning, and I didn’t like being right. However, how that all plays out is bone-chilling. I didn’t even realize what was about to happen and when I did I wanted to shout “no!” but no luck.

In this book I came to pity River as much as I loved him; he’s like a magnet that’s drawn and draws in random and dangerous things. He takes on more than he can handle and it comes back to bite him. He’s still a really compelling mix of hero and villain.

Which leads to my own large complaint about this duo – we never get a resolution to the Redding patriarch. Did I say I wanted River pushed off a cliff? He can go too.

Once again, the sins of the parents become the scars on their children. I don’t think any of those hard-partying kids in the 20s and 30s ever thought about how damaged their children would be, and how that would carry on well beyond their mistakes. Children, especially in families like the Reddings and Whites, pick up the burdens of their family not just themselves. When Violet learns even more of the truth, she feels like once again it is hers to fix. The change here is that instead of trying to be like Freddie, Violet is trying to succeed where she failed. I’d like to think that she does.

This was the heartbreaking, semi-soul crushing, leaving you with questions but somehow conclusive ending to this duology. If Tucholke decides to revisit the Between world I will devour it with relish and pain. Because that’s kind of the point – there can be both.