Three sisters must fight to the death to be queen – but is it worth it? A review of Three Dark Crowns by Kendare Blake. 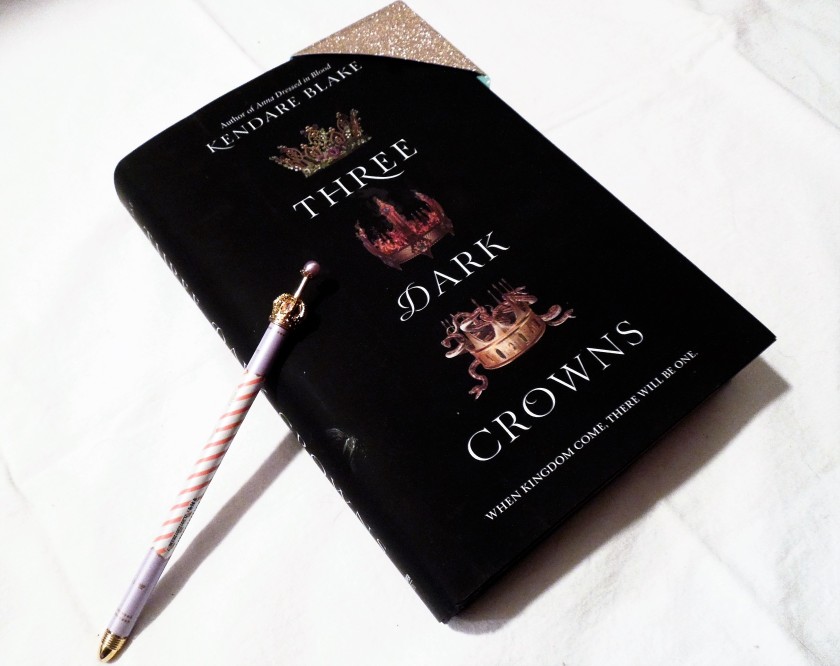 I have not read a fantasy novel that took place in an imaginary kingdom in a long time. The last one I read, which I will not name, just disappointed me so hard that I stopped reading those kinds of books. It needed to be sideways to our own reality for me to read it – urban fantasy, stuff like that. I have my suspicions that the island of Fennbirn does exist sideways to our reality, but that’s not the point. I had stopped reading a whole sub-genre because one author broke my heart. Kendare Blake opened that door back up for me.

The queendom in Three Dark Crowns exists in a pattern – three triplets are born to the previous queen, each with a gift. On their 16th birthdays the young queens begin a fight to the death to determine who will become THE Queen. This generation’s triplets – Katharine the poisoner, Arsinoe the naturalist, and Mirabella the elemental – are at the dawn of their 16th birthdays and preparing to follow the rituals that will lead to their attempts to murder one another. Obviously, things get crazy. I don’t want to say much more – but it’s all intrigue, conspiracy, and desperation. It’s fantastic.

I loved all three triplets, although like many so far I was pretty fond of Mirabella. However, it’s Arsinoe’s story I am most excited for in the next installment. I must also make a confession – I like to read the last page or last paragraph of books when I’m about halfway through them. DO NOT DO THAT WITH THIS BOOK. Usually those last lines aren’t a huge spoiler. This time, it TOTALLY WAS. I mean, it kept me really, really excited to finish but seeing it coming did dim the revelation a little bit. By the end of the novel you don’t know which triplet to root for or who to trust in their lives.

And you don’t like most of the people in their lives by the end either – you are rooting for all three queens to survive this nonsense. It’s a talented display of the complexity of people – the way we can both care and conquer someone, that we can disregard their humanity if it suits our own purposes, and the reality of loving two people at the same time. I really hate the Arrons. I have to call them out as specifically horrible. I don’t mind Katharine, and I’m excited to see how she changes in the next book, but I feel the most pity and anger on her behalf. For all her belief that she has any sort of control, Natalia either turns a blind eye or is completely ignorant to the cruelty aimed at Katharine. That won’t make a queen, it makes a victim. It’s fitting that the poisoners would be cruel. I want to see the Arron family crash and burn, and I want to see what happens with Katharine and her love interest, Pietyr.

I really loved Mirabella’s friends Bree and Elizabeth – they were not stereotypical sidekicks, and they expanded Mirabella’s agency by encouraging her to take action and make decisions. It’s a contrast to Arsinoe’s dear Jules, Joseph, and Billy – she is so undecided that they end up deciding for her, or taking action in her place. She’s not the character you’d expect that from, and that’s what makes it a delight to read. No one is who I expect them to be – while there are so many hallmarks of a fantasy kingdom in Three Dark Crowns, Blake manages to put just enough of a twist to keep surprising.

I have so many theories about what’s going to happen next and the conspiracies surrounding the sisters. I need someone to talk about this with! I made notes in my journal so when I read the next book a year or more from now I can go back and reference if I was right.

The mythology of the world is really excellent as well – a matriarchal society that worships the goddess; very unique gifts/powers and how they apply to the island and impact the outer world. I liked that it felt that the history of Fennbirn was so deeply established – by the time you’re done you can talk about the Queens of the past, their powers, their importance. And when you start to have your suspicions about how the present situation came to be, you really start to wonder about those Queens – especially the Queen who was mother to our triplets.

I just finished Anna Dressed in Blood and I’m mad I’ve been missing out on Kendare Blake for the last half decade, apparently. Geeze friends, why didn’t you say anything?!

I can’t even rate this book because my personal tastes are too confused with my more objective assessment. It was awesome. Read it.