Witches, vampires, love, alchemy…it’s got everything. Review of A Discovery of Witches by Deborah Harkness (4.5/5)

A Discovery of Witches was published February 8, 2011 by Penguin Books. I am upset that I went through 5 years of this book being out in the world and did not read it until now. I’d never even heard of it until this year! If you already read this and enjoyed it, I recommend the River of No Return by Bee Ridgway – there’s a similarity of tone.

I spent an entire Sunday reading this and finished it on Monday, September 19, 2016. 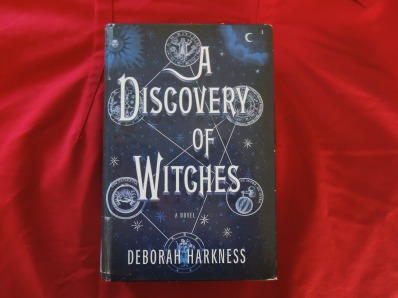 The blurb does not do this book justice. I immediately loved the cover, but was turned off by the summary. I didn’t buy it when I saw it in the store, but decided to check it out of the library.

A Discovery of Witches is the blend of so much of the best stuff in modern fantasy; bear with me because every time I tried to figure out how to summarize this excellent novel it came out sounding like Twilight. Only its a vampire/witch love story. With adults. And depth of emotion. And historical context and obscure references. It’s a novel that takes the cliche of being the Chosen One and makes it interesting again.

Our heroine is Dr. Diana Bishop – the last of the Bishop witches – who spent her life denying and strangling her own magic after the death of her parents as a child. Diana is a science historian with a focus on alchemy; the medieval blend of science and magic that experimented on the transformation of matter. While researching in Oxford’s Bodleian Library she calls up a manuscript for her research: the mysterious Ashmole 782. With her first view of the manuscript she knows its bewitched, and after a brief encounter with the book, sends it back into the bowels of the library in order to keep her life divided from magic. With the finding and returning of Ashmole 782, Diana sends a ripple through the supernatural world: every witch, vampire, and daemon wants Diana and the manuscript. One vampire in particular, Dr. Matthew Clairmont, enters Diana’s world and changes it forever. Diana and Matthew begin fighting a world of magic, segregation, science, and thousands of years of history in order to not only be together, but figure out the blended future of for all the creatures.

Speaking of creatures, there are four types of creatures in this world: humans, witches, vampires, and daemons. I like that witches are distinct creatures, not just humans with magical powers. The vampires are a blend of the traditional myth with Harkness’s own twist, and daemons are manic, creative geniuses – similar to demigods but they are the creature with the most questions in regard to their creation and origin.

This book covers history, literature, philosophy, and science and the way it has shaped the world we live in. There’s so much more to this story than I can possibly summarize – Matthew’s personal history and his family, Diana’s history, her family, and her burgeoning magical powers, not to mention the ramifications of Ashmole 782 on the entire supernatural world. The world is so complete without being over-explained. I know the political landscape of the witches, vampires, daemons, and their fear of being discovered by humans while also adhering to their own strict rules against co-mingling. PLUS, Matthew is a scientist exploring the genetics of the creatures – how they differ and overlap with each other and with humans. If you know nothing about genetics, evolution, and DNA now, you’ll know more afterward. I already put myself on the waiting list for the Seven Daughters of Eve by Bryan Sykes at the university library.

I could spend an entire post just summarizing all the details of this novel. It is so fantastically fleshed out – the world is dynamic, the threat real, and I am ready for the next book to find out what happens next. I honestly considered not reviewing A Discovery of Witches and instead reviewing the entire trilogy. I feel like I read at least three different books in the span of one anyway.

Most of the novel is spent with Diana coming to terms with the fact the she herself is dangerous – she’s spent most of her life forcing herself to be a human instead of a witch. Diana must embrace her true nature as a creature and all that means – the danger, the violence, and the wonder. Her power is huge, uncontrolled, and unacknowledged and it’s led her to find herself both a risk to those around her and sometimes utterly defenseless. Diana is marvelous – she’s intelligent and decisive, a little stubborn but attempts to be logical when she realizes it, and is aware that she guards her emotions. Diana is fun to read. She was a character I liked following around. Her desire to be her own woman and to make her own way on her merits is admirable and relatable – she demonstrates how easy it would be to get all she wanted with magic, but she’d rather have done the work.

Matthew is a little…predictable. At first. He’s the super-hot vampire who’s lived for a long time and he’s seen everything and knows everyone and is experiencing a new kind of love for the first time, a love which he resisted and brooded about. You see his protectiveness coming from a mile away and the explanation of his predatory instincts is unsurprising if well thought out. What makes Matthew different is that there’s a certain level of self-awareness that his protectiveness is not always welcome or necessary, and that Diana is capable of taking care of herself. Matthew’s violence is also real, not just a threat made or an inference that he can’t control himself around warmbloods. Matthew kills because it’s his nature – not just to feed, but to protect and avenge. Matthew is a real danger, which makes him a dynamic character to follow.

It helps that Deborah Harkness is actually a science historian so her grasp of the background material is deep, and something she’s used to translating and theorizing on. Her ability to simply explain who historical people are, why they matter, and what their work was is done in such a way that someone without any other context can grasp it. It’s interesting because the author is reflected in both Diana and Matthew – the science historian connection is obvious, but the span of knowledge and research needed to write a novel this complete is pure Matthew.

This book is dense – not that it’s difficult to understand – there’s just A LOT going on. It’s a world that is easy and fun to disappear into, and I highly recommend for someone looking for an immersive read that you are going to get excited about. And that you will want the next book, Shadow of Night, immediately.

I give A Discovery of Witches 4.5/5 for being a wild, detailed ride of a novel and for leaving me wanting more. Half-star off because some of it feels oddly placed and improbable; I have full faith however that Harkness will resolve much of my few issues by the end of the trilogy.